Posted by Sunshine at 3:21 PM No comments: 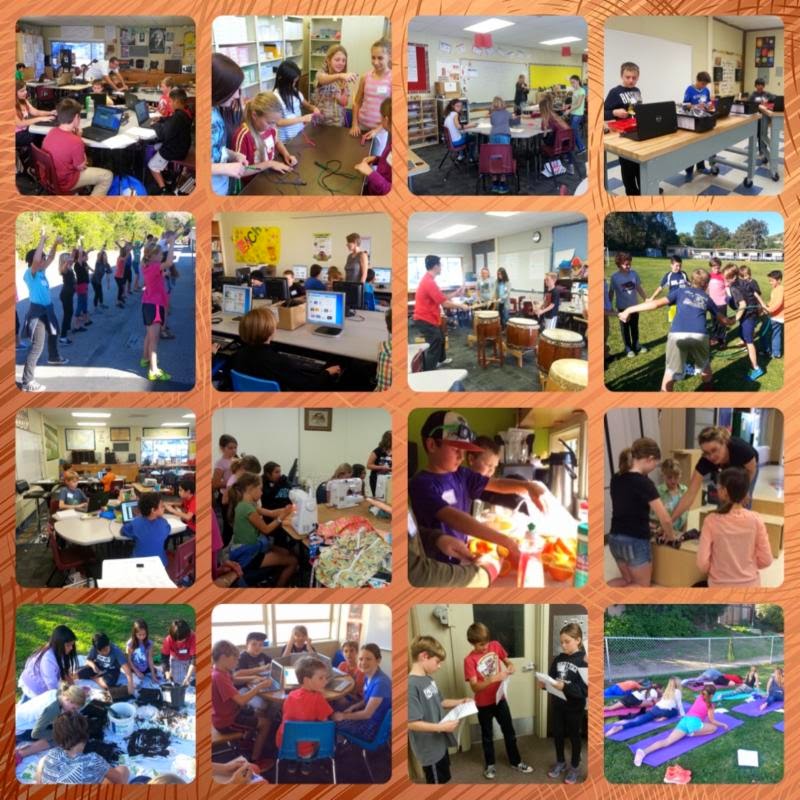 There was great excitement at Teach last Wednesday on our first day of electives.  We are thrilled to have 17 classes this year!  Many thanks to all of the parents who are teaching classes!  Pictured, from left to right:
Row 1: Android App, Jewelry, Journalism, Robotics
Row 2: Hip Hop Dance, Game Programming, Taiko Drumming, Team Building
Row 3: Computer Programming, Sewing, Nutrition and Cooking, Play Set Design
Row 4:  Gardening, Yearbook, Theatre Workshop, Yoga
Posted by Teach Booster Club at 8:48 PM No comments:

Kimberley Wormley opened the meeting by offering congratulations to Kurt and to all the teacher and parent volunteers for getting electives going this past week.  There were many positive comments passed along by students that were shared by board members and others present.  There was brief discussion of the possibility of a different time for Booster meetings; Kimberley will send out a Doodle Poll to see what options might work.  Robyn reported that the Boosters baby gift to Mr. McMillen was received with appreciation.
The minutes of the December meeting had been posted ahead of time; there were minor amendments made to those minutes.  Kimberley moved to approve the December minutes as amended, Kurt seconded the motion which passed with all present in favor, none opposed and abstaining.
Brian Olson, Treasurer, went over the current status of parent pledges.  He will send the names of families who have not yet responded to the grade representatives.  Kimberley will coordinate with grade reps on how to contact those families.  CeRae brought up that one can see who has opened email in Constant Contact, so the grade reps could use that info to find ways than email to get in touch with those families.  Kimberley shared that one parent had told her that folks who claimed scholarship would possibly have that information shared with the wider community.  It was emphasized that this information is completely confidential between Brian and the individual family requesting a scholarship.      There was discussion of a statement to the wider Teach community about the tax deductible nature of parent pledges.  Brian said that the larger task is that we need to send out letters to all families who have made pledges or donations so that they can give their tax preparers this info.  There was discussion about what is needed in this letter: amount? dates?  Brian will ask the accountant about what information is needed in this letter for tax reporting purposes.  He asked any Boosters member with example from other non-profits to send sample letters to him so that we can formulate an appropriate letter as soon as feasible, given that April is coming.  Brian also reported that he had seen that a form required by the California Secretary of State on the Booster Club’s non profit status was due and he had submitted the appropriate information to maintain our status with the State of California.  All present thanked him for his prompt action!
Kimberley gave a brief overview of the meeting being held this afternoon to convene volunteers to serve on a short term advisory committee for the Boosters Club.  Some people who had said they could serve were Summer Kabaker, Derek Gragson, Brian Olson, Charles Feltman.   This is an advisory committee; their recommendations will inform Boosters fundraising for next year, make recommendation for the amount of “Rainy Day Fund” Boosters should maintain and how to use funds in excess of that.  (See exhibit from Kimberley attached.)  These meetings would be open to anyone who wanted to attend.  There was discussion of the scope of this body: it as clarified that this committee was advisory only; the Boosters Board would make all decisions regarding use of funds.
Kurt gave a report on Electives.  He said that things seemed to go smoothly; kids and teachers and parents appeared to be happy.  He mentioned that the gardening group may spend about $100 in supplies and asked if this could be reimbursed.  Wendy said that various parent leaders have gotten creative in getting donations, for example, Bethany of Miner’s is giving a gift card.  There was discussion of how much to allocate from Boosters budget to reimburse parent volunteers for expenses incurred as a result of the Elective they are teaching.  Brian asked that parents submit receipts; an amount of about $37/Elective was discussed.  Kurt did put out an announcement about parents being able to seek reimbursement for some of their expenses around the Elective they were teaching.  Melinda moved that Boosters reimburse parent volunteers who have applied for reimbursement out of any excess Boosters funds.  Kimberley proposed that we wait until receipts from parents come in and then see where we are in terms of requests, then take a vote and allocate reimbursement.  Therefore, the motion was not voted on at this time.
CeRae Speidel, Wendy Sylvester and Robyn O’Leary reported on the Big Brothers/Big Sisters event, which was fun for all.  Dr. Prater attended the event as well.
Mr. Crabb mentioned that he thought using the Innovation Lab for constructing stage sets and props.  Melinda shared that the Teach campus is now hosting a Girl Scout Troop; she is the troop leader, meetings are Mondays 6:30 pm.  Contact Melinda Keller for more information.
Wendy Sylvester reported on Mini Mall, another very successful teach event.  Wendy will put Kate Stevens in contact with teachers for press coverage of this event.  ****ACTION ITEM: Robyn made the suggestion that someone go to the board meeting to make announcement that these events occurred at Teach.  Kate Stevens is the PR person for Boosters.  ****
Kimberley Wormley talked about the PTA Presidents’ meeting that Teach is hosting on January 22nd.  There was discussion of Teach students presenting info regarding the Big Brothers/Sisters party and Mini-Mall charity fundraising to the school board.  Kimberley recommended giving Dr. Prater information about events and needs at Teach from many parents/sources.
Kimberley mentioned that the Variety Show is coming up January 29th. Dondi appears to have things under control.
There were many items to Celebrate:  the Rourke Barn has been engaged for Derby Days.  Mr. Crabb was reimbursed by the Boosters Club for his expenses related to the Big Brothers/Sisters party.  Denise Jenkins is helping coordinate a clothing exchange for the 5th grade Yosemite trip.  Lorraine Byde is the Hospitality chair.

******ATION ITEM: Laura will ask Teresa Larsen how parents can gain access to AR testing info, other issues that came up in the fall.  Parent outreach component, brainstorm how this can happen… Also ask how she could utilize volunteers…. *******

In terms of the Craft Fair, Vanessa said that Randi will coordinate with Mrs. Crabb about re-scheduling the fair for sometime before Mother’s Day…  *****ATION ITEM: Kimberley will follow through with Randi on this.*****

Kimberley said that Ali has been working on a tri fold brochure for Open House.  CeRae said she would help with this.  Kimberley will email the draft out to people for comments/feedback/corrections. Melinda had to leave the meeting to return to work at this point.

Kurt asked if the Mister system for providing cool mist on hot days could remain on the action item list.  There was discussion of possible donation from local business for the system and a longer hose.  *****Kurt will check into Home Depot to see if they would donate these items.*****

There being no further business, Kimberley moved to adjourn the meeting.  Brian seconded the motion with all present in favor, none opposed or abstaining.

Laura Cooper, secretary
Posted by Sunshine at 3:15 PM No comments:

Teach students help in the community

Court Appointed Special Advocates (CASA) of San Luis Obispo County has received a donation of $1,365 from the students in Erin Serafin’s fifth-grade class at Teach Elementary School. To raise money for CASA, students worked in teams to produce items to sell in the school’s craft minimall. Among the creative items they produced were decorated water bottles, lava lamps, stress balls, keychains and origami wallets.
The donation will go toward recruiting, training and supervising volunteer advocates for abused and neglected children in San Luis Obispo County.