Have a Great Summer! 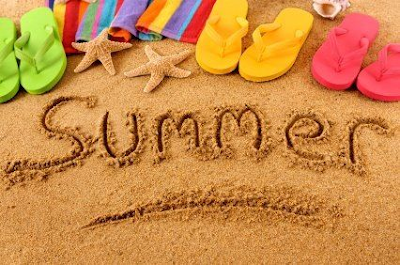 End-of-Year Reminders
--Check lost and found and your child's classroom for any items your child may have left at school.  Unclaimed items will be donated over the summer.
--Pick up any medications your child may have in the office.
--Get a yearbook.  We ordered extras--available in the office for $20 after they are distributed in classrooms next week.
--6th grade families: Turn in your child's proof of the TDAP immunization so their middle school registration is not delayed.
--HAVE A GREAT SUMMER!!!
Posted by Teach Booster Club at 6:15 PM No comments:

There was a correction to the minutes from last month: Wendy moved to change the name from “Robyn O'Leary” to “Robin Hernandez” as the person who chaired Teacher appreciation week, and to then accept the minutes as amended. Kurt seconded the motion which passed with all in favor.
Kimberley said that it has been an encouraging current year; there was support for chairpersons from the Boosters board, willingness on everyone’s part to make changes (for example, changing from March-a-Thon to the Kickit games), sound fiscal stewardship, and improved communication regarding direct support as a supplement to income raised from fundraising events.
The strategic planning committee, which formed earlier this year to evaluate fiscal policy and fundraising programs, will meet again next week.  The committee is inclined to recommend a surplus/savings sufficient to cover a full year’s worth of expenses, but realizes that it may not be allowable for a non-profit to accumulate assets to this level.  The committee is likely to recommend additional outsourcing/partnering with outside organizations, such as with the Kick-it games, to continue to reduce the number of volunteer hours needed to support fundraising events. The committee is likely to recommend further reductions in the amount of direct support requested from families, but did not indicate how that would/could be accomplished. The board looks forward to the committee’s final report.

Treasurer’s report: it It looks like income was received within $1000 of realized expenses. In terms of total parent financial participation, the Boosters connected with 93% of Teach families to receive pledges and / or direct support payments up to and including the recommended $450 per-student donation.  Seven percent nonparticipation persisted despite, personal contact with each family for the purpose of answering questions about the recommended donation pledge and payment options. A one-on-one buddy system, pairing new families with a current Teach family was proposed, and it was suggested that even stronger pledge participation could be realized by elevating teacher relationships relative to direct support fundraising.
The craft fair was financially successful. Teachers felt that the craft fair ran in competition with the 5th grade mini-mall, and observed that it came at a particularly busy time of the year (early May) and suggested that the craft fair might be even more successful and less chaotic if held outside of school hours, perhaps on a Saturday.

This brought up a discussion about better communication with Teach teachers and staff. Kimberley attended the last staff meeting to see if this is good idea for the future. There is a meeting in August during which teachers go over the calendar for the school year. This might be held onsite Thursday August 20th, onsite. It could be a good time for board members and/or chairpersons to communicate with teachers.

There was an idea for new fundraiser: Boosters could set up a rest stop in SLO to support the annual AIDA AIDS/LifeCycle ride, which brings thousands of cyclists through SLO County each year and will take place June 5 – 11, 2016. Participation requires that we contact the organization a year in advance and that we also acquire a city permit. *****ACTION ITEM: Kit and Robyn will scope out details for this possibility for next year.***** www.aidslifecycle.org

Principal's report: James introduced Darla and thanked the Boosters for their hard work and for a successful year.  James responded to the call for even better Booster-teacher communication and recommended a monthly scheduled Booster-teacher communication time on administrative Mondays. Next year’s district-plus-site calendar was presented for review and consideration with respect to additional scheduling of events. James renewed the proposal for two rounds of electives: the first round in Sep/Oct, and the second in January 2016.

Next year’s, 4th & 5th grade classrooms s will have 32 kids each; 6th grade classrooms will have 33 kids each. If there is attrition over the summer, those spots will not be filled in from the waiting list. There will be 20 minutes added to the school day next year: Tuesday through Friday schedule will be 8:25-2:50, with recess time staying the same for Teach. Continuation of the onsite after school STAR program will presumably depend on how many Teach families need care for their children.
SBAC testing results will likely be made public in August. Darla will go over the SBAC results  at Back-to-School Night in the fall (September 1) and explain how the results of the new assessment are to be interpreted.
James renewed the request that the Boosters provide financial support for the new sound system that was purchased back in winter.
Sixth grade math placement results have been mailed out to families.

The Casino night auction fundraiser: was a fun event for all; teachers had fun, parents liked it, and it netted $7,000. The auctioneer stated that he would come back; he loved the event. Wine was poured by Biddle Ranch, John and Marcie O’Rourke were great hosts, and people enjoyed the poker and dancing. A committee to organize next year’s auction was put forward: chaired by Wendy Sylvester with co-chair Shawna Thomson. Boosters will keep the same fundraising goal for next year’s auction.

There was a motion by Wendy Sylvester to vote in the new board as nominated during the May meeting: Kimberley Wormley as President, Laura Cooper as secretary with voting rights, CeRae Speidel for VP, Brian Olson for Treasurer, Terrie Marshall as Booster at large board member with voting rights, Robyn O’Leary as member at large with voting rights, James McMillan as staff representative. The motion was seconded by Mike Berger which passed with all present in favor, none opposed or abstaining.

There was a motion to end the meeting, which was unanimously passed by all present. (Notes taken by CeRae Speidel, typed and edited by Laura Cooper, secretary)

Posted by Unknown at 9:00 AM No comments:

Battle of the Books!

Friday, May 29, 10 teams of students competed in 6 rounds all morning to see who would face off in the Grand Battle of the Books after lunch.  Considering 154 of our 179 students participated, it was not easy to get to the finals!  It was an epic battle--neither team missed a question until number 18, and they ended the 24-question battle tied.  In sudden death overtime, the Dark Blue Team edged ahead to take the gold.  Congratulations to all of our students who competed (4th graders read at least 10 of the books, 5th graders read at least 12 and 6th graders read at least 14).  This was a culmination of a year-long reading program that was hugely successful!

Special thanks to Robyn O'Leary and her many volunteers who ran the morning battles and provided snack and lunch for the students; and to Mr. Crabb for coordinating this school-wide event.
Posted by Teach Booster Club at 6:07 PM No comments: